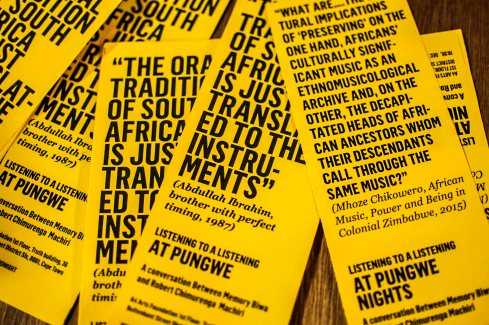 Listening to a Listening

We perform through an experimental platform, “Pungwe Nights”, to track and reimagine transnational sonic cultures in southern Africa. We re(hear)se historical and contemporary recordings between Namibia and Zimbabwe on a reel-to-reel player, turntables and computer. Our practice with sound technology has parallel currents, whilst it draws on research on the use of African bodies in phonetic experiments in colonial linguists and ethnomusicology, we explore the concept of the body as sound technology and translation of voice to various instruments and vice versa. Through our performance we engage the possibilities enunciated by technology, the ability as Alexander Weheliye elucidates, ‘to split sound from source’, only to later reframe and amplify the sound within phonographies.

We playback Machiri’s mbira tongues (lamellaphone) from Mhondoro, Zimbabwe in response to khoekhoegowab orature recorded by Ernst and Ruth Dammann (Sound Collection housed at Basler Africa Bibliographian (BAB), Namibia and Southern Africa Library, Basel, Switzerland). We re-code tongues and produce a new loop anchored in the recordings’ socio-historical context and the performers mastery of their instruments. Using the remix framework, we interrogate the preservation impulse of hegemonic archives and permit the notion of an un-originary sound or speakerly texts connected to source. Moreover, a remix challenges the value of a mimic as an authentic work which supports its own existence reclaiming authenticity through adaptation and transformation far away from replication. The performance is a continuity and a rupture, same, same but different. As we contemporaneously playback recordings from 1950s and 2015 Namibia and Zimbabwe, we re-invent a future present.

Pungwe is an interdisciplinary project circling African music with related contemporary arts discourses and spaces. This collaborative practice expands into the current project “Listening to a Listening at Pungwe”. The central ideology of Pungwe draws on active convergence that is commonly linked to deep spiritual commitment. The interconnection of morale elevation and spiritual intervention is a reality in our contemporary spaces that drives convergence through song in overnights of wakefulness. Pungwe can be streamed as a commune of people that are “woke”, referring to wakefulness as an act of mourning, morning used adjectivally, anticipating sun rise as an emancipatory symbol.

A gathering of this form was known as Pungwe (shona word for vigil), during Zimbabwe’s armed struggle of colonial resistance. It was mediated through mbira music rituals.